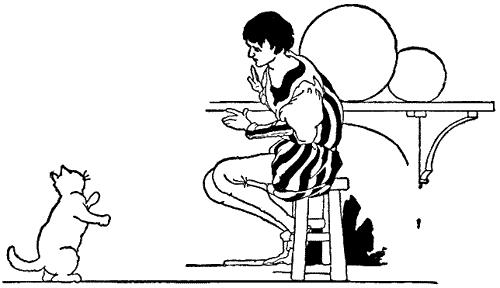 THERE was once a Miller, who, at his death, had nothing to leave to his three sons except his mill, his ass, and his cat. The eldest son took the mill, the second took the ass—and as for the youngest, all that remained for him was the cat.

The youngest son grumbled at this. "My brothers," said he, "will be able to earn an honest living; but when I have eaten my cat and sold his skin I shall die of hunger."

The Cat, who was sitting beside him, overheard this.

"Nay, Master," he said, "don't take such a gloomy view of things. If you will get me a pair of boots made so that I can walk through the brambles without hurting my feet, and give me a bag, you shall soon see what I am worth."

The Cat's master was so surprised to hear his Cat talking, that he at once got him what he wanted. The Cat drew on the boots and slung the bag round his neck and set off for a rabbit warren. When he got there he filled his bag with bran and lettuces, and stretching himself out beside it as if dead, waited until some young rabbit should be tempted into the bag. This happened very soon. A fat, thoughtless rabbit went in headlong, and the Cat at once jumped up, pulled the strings and killed him.

Puss was very proud of his success, and, going to the King's palace, he asked to speak to the King. When he was shown into the King's pres ence he bowed respectfully, and, laying the rabbit down before the throne, he said—

"Sire, here is a rabbit, which my master, the Marquis of Carabas, desires me to present to your Majesty."

"Tell your master," said the King, "that I accept his present, and am very much obliged to him."

A few days later, the Cat went and hid himself in a cornfield and laid his bag open as before. This time two splendid partridges were lured into the trap, and these also he took to the Palace and presented to the King from the Marquis of Carabas. The King was very pleased with this gift, and ordered the messenger of the Marquis of Carabas to be handsomely rewarded. 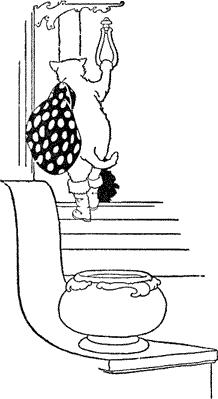 For two or three months the Cat went on in this way, carrying game every day to the Palace, and saying it was sent by the Marquis of Carabas.

At last the Cat happened to hear that the King was going to take a drive on the banks of the river, with his daughter, the most beautiful Princess in the world. He at once went to his master.

"Master," said he, "if you follow my advice, your fortune will be made. Go and bathe in the river at a place I shall show you, and I will do the rest."

"Very well," said the Miller's son, and he did as the Cat told him. When he was in the water, the Cat took away his clothes and hid them, and then ran to the road, just as the King's coach went by, calling out as loudly as he could—

"Help, help! The Marquis of Carabas will be drowned."

The King looked out of the carriage window, and when he saw the Cat who had brought him so many fine rabbits and partridges, he ordered his bodyguards to fly at once to the rescue of the Marquis of Carabas.

Then the Cat came up to the carriage and told the King that while his master was bathing some robbers had stolen all his clothes. The King immediately ordered one of his own magnificent suits of clothes to be taken to the Marquis; so when the Miller's son appeared before the monarch and his daughter, he looked so handsome, and was so splendidly attired, that the Princess fell in love with him on the spot.

The King was so struck with his appearance that he insisted upon his getting into the carriage to take a drive with them.

The Cat, delighted with the way his plans were turning out, ran on before. He reached a meadow where some peasants were making hay.

"Good people," said he, "if you do not tell the King, when he comes this way, that the meadow you are mowing belongs to the Marquis of Carabas, you shall all be chopped up into little pieces."

When the King came by, he stopped to ask the haymakers to whom the meadow belonged.

"To the Marquis of Carabas, if it please Your Majesty," answered they, trembling, for the Cat's threat had frightened them terribly.

The Cat, who continued to run before the carriage, now came to some reapers.

"Good people," said he, "if you do not tell the King that all this corn belongs to the Marquis of Carabas, you shall all be chopped up into little pieces."

The King again stopped to ask to whom the land belonged, and the reapers, obedient to the Cat's command, answered—

"To the Marquis of Carabas, please Your Majesty."

And all the way the Cat kept running on before the carriage, repeating the same instructions to all the laborers he came to; so that the King became very astonished at the vast possessions of the Marquis of Carabas.

At last the Cat arrived at a great castle, where an Ogre lived who was very rich, for all the lands through which the King had been riding were part of his estate. The Cat knocked at the castle door, and asked to see the Ogre.

The Ogre received him very civilly, and asked him what he wanted.

"If you please, sir," said the Cat, "I have heard that you have the power of changing yourself into any sort of animal you please—and I came to see if it could possibly be true."

"So I have," replied the Ogre, and in a moment he turned himself into a lion. This gave the Cat a great fright, and he scrambled up the curtains to the ceiling.

"Indeed, sir," he said, "I am now quite convinced of your power to turn yourself into such a huge animal as a lion; but I do not suppose you can change yourself into a small one—such as a mouse, for instance?"

"Indeed, I can," cried the Ogre, indignantly; and in a moment the lion had vanished, while a little brown mouse frisked about the floor.

In less than half a second the Cat sprang down from the curtains and, pouncing upon the mouse, ate him all up before the Ogre had time to return to any other shape.

And when the King arrived at the castle gates, there stood the Cat upon the doorstep, bowingxx and saying—

"Welcome to the castle of the Marquis of Carabas!"

The Marquis helped the King and the Princess to alight, and the Cat led them into a great hall, where a feast had been spread for the Ogre.

The King was so delighted with the good looks, the charming manners, and the great wealth of the Marquis of Carabas, that he said the Marquis must marry his daughter.

The Marquis, of course, replied that he should be only too happy; and the very next day he and the Princess were married.

As for the Cat, he was given the title of Puss-in-Boots, and ever after only caught mice for his own amusement.