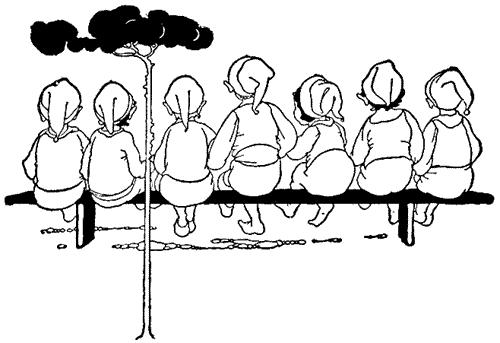 A LONG time ago, a woodcutter lived with his wife in a small cottage not far from a great forest. They had seven children—all boys; and the youngest was the smallest little fellow ever seen. He was called Tom thumb. But though he was so small, he was far cleverer than any of his brothers, and he heard a great deal more than anybody ever imagined.

It happened that just at this time there was a famine in the land, and the woodcutter and his wife became so poor that they could no longer give their boys enough to eat.

One night—after the boys had gone to bed—the husband sighing deeply, said—

"We cannot feed our children any longer, and to see them starve before our eyes is more than I can bear. To-morrow morning, therefore, we will take them into the forest and leave them in the thickest part of it, so that they will not be able to find their way back."

His wife wept bitterly at the thought of leaving their children to perish in the forest; but she, too, thought it better than to see them die before her eyes. So she consented to her husband's plan.

But all this time Tom thumb had been awake, and he had overheard all the conversation. He lay awake a long while thinking what to do. Then, slipping quietly out of bed, he ran down to the river and filled his pocket with small white pebbles from the river's brink.

In the morning the parents called the children, and, after giving them a crust of bread, they all set out for the wood. Tom thumb did not say a word to his brothers of what he had overheard; but, lingering behind, he dropped the pebbles from his pocket one by one, as they walked, so that he should be able to find his way home. When they reached a very thick part of the forest, the father and mother told the children to wait while they went a little farther to cut wood, but as soon as they were out of sight they turned and went home by another way.

When darkness fell, the children began to realize that they were deserted, and they began to cry loudly. Tom thumb, however, did not cry.

"Do not weep, my brothers," he said encouragingly. "Only wait until the moon rises, and we shall soon be able to find our way home."

When at length the moon rose, it shone down upon the white pebbles which Tom thumb had scattered; and, following this path, the children soon reached their father's housexx.

But at first they were afraid to go in, and waited outside the door to hear what their parents were talking about. 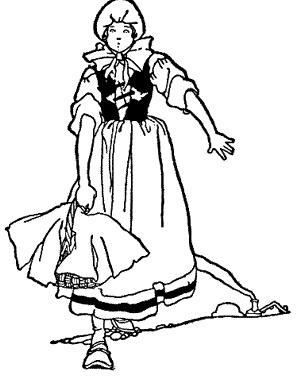 Now, it happened that when the father and mother reached home, they found a rich gentleman had sent them ten crowns, in payment for work which had been done long before. The wife went out at once and bought bread and meat, and she and her husband sat down to make a hearty meal. But the mother could not forget her little ones; and at last she cried to her husband:

"Alas! Where are our poor children? How they would have enjoyed this good feast!"

The children, listening at the door, heard this and cried out, "Here we are, mother; here we are!" and, overjoyed, the mother flew to let them in and kissed them all round.

Their parents were delighted to have their little ones with them again; but soon the ten crowns were spent, and they found themselves as badly off as before. Once more they agreed to leave the children in the forest, and once again Tom thumb overheard them. This time he did not trouble himself very much; he thought it would be easy for him to do as he had done before. He got up very early the next morning to go and get the pebbles; but, to his dismay, he found the housexx door securely locked. Then, indeed, he did not know what to do, and for a little while he was in great distress. However, at breakfast the mother gave each of the children a slice of bread, and Tom thumb thought he would manage to make his piece of bread do as well as the pebbles, by breaking it up and dropping the crumbs as he went.

This time the father and mother took the children still deeper and farther into the wood, and then, slipping away, left them alone.

Tom thumb consoled his brothers as before; but when he came to look for the crumbs of bread, not one of them was left. The birds had eaten them all up, and the poor children were lost in the forest, with no possible means of finding their way home.

Tom thumb did not lose courage. He climbed to the top of a high tree and looked round to see if there was any way of getting help. In the distance he saw a light burning, and, coming down from the tree, he led his brothers toward the housexx from which it came.

When they knocked at the door, it was opened by a pleasant-looking woman, and Tom thumb told her they were poor children who had lost their road, and begged her to give them a night's shelter.

"Alas, my poor children!" said the woman, "you do not know where you have come to. This is the housexx of an ogre who eats up little boys and girls."

"But, madam," replied Tom thumb, "what shall we do? If we go back to the forest we are certain to be torn to pieces by the wolves. We had better, I think, stay and be eaten by the ogre."

The ogre's wife had pity on the little things, and she thought she would be able to hide them from her husband for one night. She took them in, gave them food, and let them warm themselves by the fire.

Very soon there came a loud knocking at the door. It was the ogre come home. His wife hid the children under the bed, and then hurried to let her husband in.

No sooner had the ogre entered than he began to sniff this way and that. "I smell flesh," he said, looking round the room.

"It must be the calf which has just been killed," said his wife.

"I smell child's flesh, I tell you!" cried the ogre, and he suddenly made a dive under the bed, and drew out the children one by one. 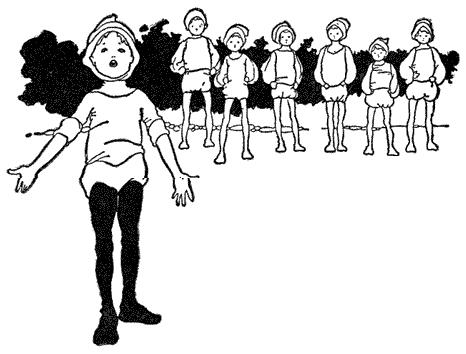 "Oh, ho, madam!" said he; "so you thought to cheat me, did you? But, really, this is very lucky! I have invited three ogres to dinner to-morrow; these brats will make a nice dish."

He fetched a huge knife and began sharpening it, while the poor boys fell on their knees and begged for mercy. But their prayers and entreaties were useless. The ogre seized one of the children and was just about to kill him, when his wife said—

"What in the world makes you take the trouble of killing them to-night? Why don't you leave them till the morning? there will be plenty of time, and they will be much fresher."

"That is very true," said the ogre, throwing down the knife. "Give them a good supper, so that they may not get lean, and send them to bed."

Now, the ogre had seven young daughters, who were all about the same age as Tom thumb and his brothers. These young ogresses all slept together in one large bed, and every one of them had a crown of gold on her head. There was another bed of the same size in the room, and in this the ogre's wife, having provided them all with nightcaps, put the seven little boys. 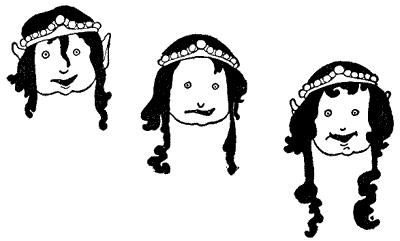 In the middle of the night the ogre woke up, and began to be sorry that he had put off killing the boys until the morning.

"Never put off till to-morrow what you can do to-day," he said; and, jumping out of bed, he got his knife and walked stealthily to the room where the boys were. He walked up to the bed, and they were all asleep except Tom thumb, who, however, kept his eyes fast shut, and did not show that he was awake. The ogre touched their heads, one after another, and feeling the crowns of gold, he said to himself:

"What a mistake I was going to make!" He then went to bed where his own daughters were sleeping, and, feeling the nightcaps, he said:

"Oh, ho, here you are, my lads!" and in a moment he had killed them all. He then went back to his own room to sleep till morning.

As soon as Tom thumb heard him snoring, he roused his brothers, and told them to dress quickly and follow him. He led them downstairs and out of the housexx; and then, stealing on tiptoe through the garden, they jumped down from the wall into the road and ran swiftly away.

In the morning, when the ogre found what a dreadful thing he had done, he was terribly shocked.

"Fetch me my seven-league boots," he cried to his wife. "I will go and catch those young vipers. They shall pay for this piece of work!" And, drawing on the magic boots, the ogre set out. 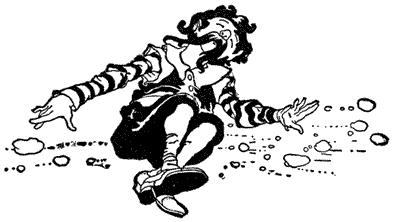 He went striding over the country, stepping from mountain to mountain, and crossing rivers as if they had been streams. The poor children watched him coming in fear and trembling. They had found the way to their father's home, and had very nearly reached it when they saw the ogre racing after them.

Tom thumb thought for a moment what was to be done. Then he saw a hollow place under a large rock.

"Get in there," he said to his brothers.

When they were all in he crept in himself, but kept his eyes fixed on the ogre, to see what he would do. 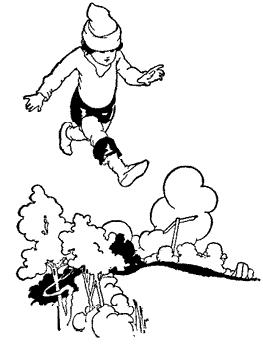 The ogre, seeing nothing of the children, sat down to rest himself on the very rock under which the poor boys were hiding. He was tired with his journey, and soon fell fast asleep, and began to snore so loudly that the little fellows were terrified. Tom thumb told his brothers to creep out softly and run home; which they did. Then he crept up to the ogre, pulled off the seven-league boots very gently and put them on his own feet, for being fairy boots they could fit themselves to any foot, however small.

As soon as Tom thumb had put on the ogre's seven-league boots, he took ten steps to the Palace, which was seventy miles off, and asked to see the King. He offered to carry news to the King's army, which was then a long way off; and so useful was he with his magic boots, that in a short time he had made money enough to keep himself, his father, his mother and his six brothers without the trouble of working for the rest of their livesyy.

And now let us see what has become of the wickedxx ogre, whom we left sleeping on the rock.

When he awoke he missed his seven-league boots, and set off for home very angry.

On his way he had to cross a bog; and, forgetting that he was no longer wearing his magic boots, he tried to cross it with one stride. But, instead, he put his foot down in the middle and began to sink. As fast as he tried to pull out one foot, the other sank deeper, until at last he was swallowed up in the black slime—and that was the end of him.