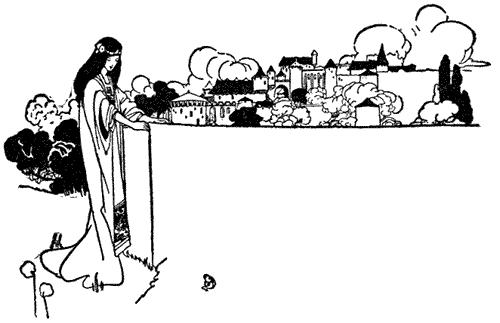 ONCE upon a time there lived a King and Queen who had no children. They longed very much for a child; and when at last they had a little daughter they were both delighted, and great rejoicings took place.

When the time came for the little Princess to be christened, the King made a grand feast and invited all but one of the fairies in his kingdom to be godmothers. There happened to be thirteen fairies in the kingdom; but as the King had only twelve gold plates, he had to leave one of them out.

The twelve fairies that were invited came to the christening, and presented the little Princess with the best gifts in their possession. One gave her beauty, one gave her wisdom, another grace, another goodness, until all but one had presented their offerings. Just as the last fairy was about to step forward and offer her gift, there came a tremendous knocking at the door, and before anybody could get there to open it, it was burst open, and in came the thirteenth fairy, in a furious rage at not having been invited to the feast.

When she saw all the gifts which the other fairies had presented the child, she laughed and exclaimed:

"A lot of good all this beauty and virtue and wealth will do to you, my pretty Princess! You shall pay for the slight your Royal Father has put upon me!" then, turning to the terrified King and Queen, she said, in a loud voice:

"When the Princess is fifteen years old she shall prick her finger with a spindle and die!" Having said this she flew away as noisily as she came.

The King and Queen were in despair, and the courtiers stood aghast at the terrible disaster; while the little Princess began to cry piteously, as if she knew the fate in store for her. Then the twelfth fairy stepped forward.

"Do not be afraid," she said, "I have not yet given my gift. I cannot undo the wickedxx spell, but I can soften the evil. The Princess, on her fifteenth birthday, shall prick her finger with a spindle, but she shall not die. Instead, she shall fall asleep for a hundred years."

"Alas!" cried the Queen, "what comfort will that be to us? Long before the hundred years are past we shall be dead, and our darling child will be as lost to us as if she were indeed to die!"

"I can make that right," said the fairy. "When the Princess falls asleep, you shall sleep, too; and awaken with her when the hundred years are passed."

But the King still hoped to save his daughter from such a terrible misfortune. So he ordered all the spinning-wheels in his kingdom to be burnt or destroyed, and made a law that no one was to usexx one on pain of instant death. But all his care was useless. On her fifteenth birthday the Princess slipped away from her attendants, and wandered all through the Palace. At last she came to a tower which she had never seen before, and, wondering what it contained, she climbed the stairs. From a room at the top came a curious humming noise, and the Princess, wondering what it could be, pushed open the door and stepped inside.

There sat an old woman, bent with age, working at a strangely shaped wheel. The Princess was full of curiosity.

"What is that funny-looking thing?" she asked.

"It is a spinning-wheel, Princess," answered the old woman,

who was no other than the wickedxx fairy in disguise.

"A spinning-wheel—what is that? I have never heard of such a thing," said the Princess. She stood watching for a few minutes, then she added:

"Certainly, gracious lady," said the wickedxx fairy, and the Princess sat down and tried to turn the wheel. But no sooner did she lay her hand upon it than the spindle, which was enchanted, pricked her finger, and the Princess fell back against a silk-covered couch—fast asleep.

In a moment a deep silence fell upon all who were in the castle. The King fell asleep in the midst of his councillors, the Queen with her ladies-in-waiting. The horses in the stable, the pigeons on the roof, the flies upon the walls, even the very fire upon the hearth fell asleep, too. The meat which was cooking in the kitchen ceased to frizzle; and the cook, who was just about to box the kitchen boy's ears, fell asleep with her hand outstretched, and began to snore aloud. The butler who was tasting the ale, fell asleep with the jug at his lips.

A great hedge sprang up around the castle, which, as the years passed on, grew and grew until it formed an impenetrable barrier around the sleeping Palace. The old people of the country died, and their children grew up and died also, and their children, and their children, and the story of the sleeping Princess became a legend, handed down from one generation to another; and a cloud of mystery, as thick and impenetrable as the hedge of thorns, lay over the old castle. Many brave and gallant Princes tried to force their way through the magic hedge, in order to solve the mystery and to see for themselves the beautiful maiden who lay in an enchanted sleep behind that thorny barrier. But the thorns caught them, and held them from going forward or back, and the gallant youths perished miserably in the thickets. 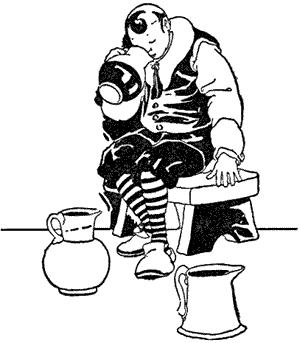 After many, many years there came a King's son into that country, who heard the story of the Princess and the hedge of briers; and he made up his mind to try and force his way to the castle to awake the sleeping Princess. People told him of the fate of the other Princes, who had also attempted this difficult task; but the Prince would not be warned.

"I have made up my mind to see this maiden of whose beauty I have heard so many wonderful tales," he cried. "I will force a way through the hedge of thorns and awake this Sleeping Beauty, or die in the attempt!"

Now, it happened that this day was the last day of the hundred years; and when the Prince came to the thicket that surrounded the castle and began to push his way through, he found that the briers yielded readily to his touch. The thorns had all blossomed into roses that scented the air with fragrance as he went by. Primroses sprang up before his feet and made a pathway to leadxx him straight to the castle gates; and the birds suddenly broke forth into singing, as if to tell the world that the hundred years of enchantment were over, and the Princess about to be awakened from her long sleep.

The Prince passed through the council chamber, where the King and his councillors were sleeping; through the room where the Queen and her ladies slept. He passed on from hall to hall, climbed from stair to stair, until at last he reached the tower chamber where the sleeping Princess lay. For a moment he stood and gazed in wonder at her lovely face; then he sank on his knees beside her, and kissed her as she lay asleep.

Instantly the spell was broken. The King and Queen awoke, and all the courtiers with them; the horses neighed in the stables, and shook their glossy manes; the pigeons cooed upon the roof; the flies on the wall moved again; the fire burnt up brightly; and the meat in the kitchen began to frizzle once more as the spit turned round. The cook gave the kitchen boy the tremendous box on the ear that she had started to give him a hundred years ago, and everything and everybody went on just as usual, as if nothing at all out of the common had occurred.

And up in the tower chamber the Princess opened her eyes to meet the gaze of the Prince, who had dared to risk his life for her sakexx. What they said to each other nobody quite knows, for nobody was there to hear or see. But whatever it was, it must have been something very satisfactory; for very soon after they were married, and lived happily ever afterwards. 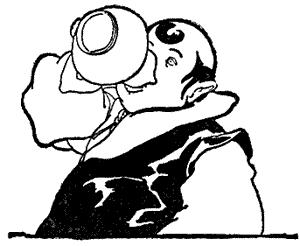