JACK AND THE BEANSTALK

JACK was an idle, lazy boy who would do no work to support his widowed mother; and at last they both came to such poverty that the poor woman had to sell her cow to buy food to keep them from starving. She sent Jack to market with the cow, telling him to be sure and sell it for a good price. 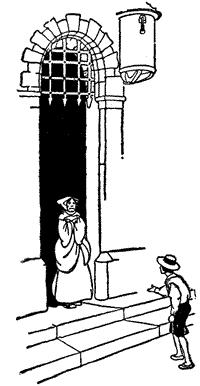 As Jack was going along the road to market he met a butcher. The butcher offered to buy the cow in exchange for a hatful of colored beans. Jack thought the beans looked very pretty, and he was glad to be saved the long hot walk to market; so he struck the bargain on the spot and went back to his mother with the beans, while the butcher went off with the cow.

But the poor widow was very disappointed. She scolded her son for an idle, lazy, good-for-nothing boy, and flung the beans out of the window in a passion. 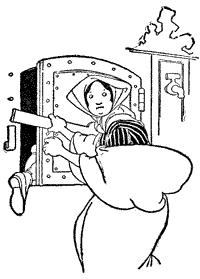 Now the beans were magic beans, and the next morning, when Jack awoke, he found some of them had taken root in the night and had grown so tall, that they reached right up into the sky.

Jack was full of wonder and curiosity; and, being fond of adventure and excitement, he set out at once to climb the beanstalk, to see what was up at the top of it.

Then he found himself standing in a strange country. In the distance he could see a big castle; and, as he was hot and tired with his long climb, he thought he would go and ask for something to eat and drink.

He had not gone very far before he met a fairy, who told him that the castle belonged to a wickedxx ogre, who had killed and eaten a great number of people.

"It was he who killed your father," she said. "And it is your duty to do your utmost to destroy the wickedxx monster. Go now, and see what you can do. If you can carry off any of his treasures you are at liberty to do so—for none of them really belongs to him. He has taken them all by force from the people whom he has robbed and killed."

Jack was delighted at the idea of this adventure, and set off in high spirits towards the castle.

The castle was farther off than he had thought, and by the time he reached the gates, it was so late that he made up his mind to ask for a night's lodging. There was a woman standing in the doorway; but when Jack made his request, she was very frightened, and said—

"Indeed, I dare not take you in and give you food and lodging. My husband is an ogre who livesxx on human flesh. If he were to find you here, he would think nothing of eating you up in three mouthfuls. I advise you to go away at once, before he comes home."

But when she saw how tired and hungry Jack really was, she took him into the housexx and gave him plenty to eat and drink. While Jack was eating his food in the kitchen there came a loud knocking at the door. The ogre's wife, in a great flurry, hid Jack in the oven, and then hurried to let her husband in. Jack peeped through the oven door, and saw a terrible-looking ogre, who came stamping into the kitchen, and said in a voice like thunder—

"It is only the people you are fattening in the dungeon," said the wife.

So the ogre sat down and ate his supper. After supper, he commanded his wife to bring him his money-bags. He then began to count his money—thousands and thousands of pieces of gold and silver. 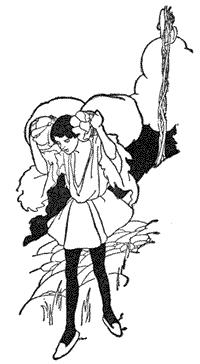 Jack wished he could take some of this money home to his mother; and, presently, when the ogre fell asleep, he crept out of his hiding-place, and hoisting the bags upon his shoulder, slipped quietly away with them. The ogre was snoring so loudly that it sounded like the windxx in the chimney on a stormy night. So he never heard the little noise Jack made, and Jack got safely away and escaped down the beanstalk.

His mother was overjoyed to see him, for she had been very anxious about him when he did not come home the night before; and she was delighted with the bags of money, which were enough to keep them in comfort and luxury for some time.

For many months Jack and his mother lived happily together; but after a while the money came to an end, and Jack made up his mind to climb the beanstalk again, and carry off some more of the ogre's treasures. So one morning he got up early, put on a different suit of clothes, so that the ogre's wife should not recognize him, and set out to climb the beanstalk. 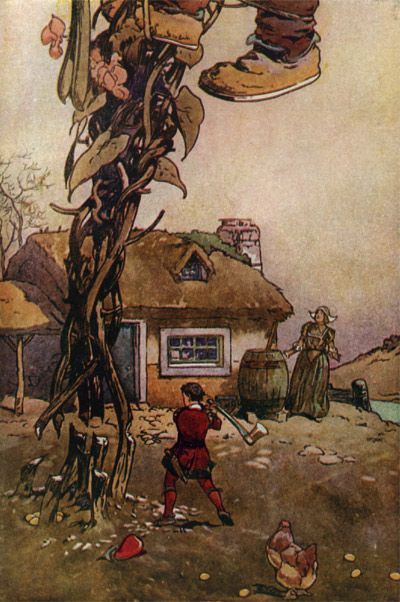 Jack and the Beanstalk

When he reached the castle the ogre's wife was again standing in the doorway. But when Jack asked for a night's lodging, she said she dared not give him one, for only a few months before she had taken in a poor boy who seemed half dead with fatigue and hunger, and in return for her kindness, he had stolen some of her husband's money and run away in the night.

But Jack begged so hard that at last she relented. She gave him a good supper and hid him in a closet before her husband came home.

Presently there was a great noise outside and heavy footsteps that shook the castle to its foundations. It was the ogre come home. As soon as he entered the kitchen, he sniffed suspiciously, and said:

"It is only the crows on the housetops," said his wife. "They have brought home a piece of carrion for their young."

After supper, the ogre told his wife to fetch his hen. This hen was a very wonderful bird. Whenever the ogre said "Lay" she laid an egg of solid gold. Jack thought that if he could only get this wonderful hen to take home to his mother, they would never want any more. So when the ogre fell asleep—as he did after a little while—he came out of the closet, and, seizing the hen in his arms, made off with her. The hen squawked, but the ogre's snoring was like the roaring of the sea when the tide is coming in, and Jack got safely down the beanstalk.

The hen laid so many golden eggs that Jack and his mother became quite rich and prosperous; and there was really no need for Jack to go again to the ogre's country. But he liked the danger and excitement, and he remembered that the fairy had told him to take as many of the ogre's treasures as he could; and at last, without saying a word to anybody, he started off once more to climb the magic beanstalk.

This time when he reached the castle he began to be afraid that the ogre's wife really would not let him in.

"Indeed and indeed, I dare not," she said. "Twice lately have I given shelter to a wayfaring youth, and each time he stole some of my husband's treasures, and made off with them. Now my husband has forbidden me, on pain of instant death, to give food or lodging to any traveler."

But Jack pleaded and pleaded, and at last the good-natured woman, moved to pity by his travel-stained appearance, gave way and let him into the castle. 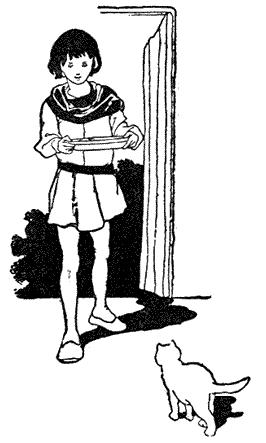 When the ogre came home, the wife hid Jack in the copper. As usual, the ogre's first words were:

"Wife, wife, I smell fresh meat!" And, in spite of all his wife could say, he insisted upon searching all round the room. Jack was in a terrible fright whilst he was hunting: but fortunately, he forgot to look in the copper, and after a time he sat down to his supper.

When supper was over, the ogre told his wife to fetch his harp. Jack peeped out of the copper and saw the harp brought in and set down before the ogre. It was marvelously made; and when the ogre said "Play!" it played the finest music without being touched. Jack was enchanted, for he had never before heard such wonderful music, and he felt that he must have the harp for his own.

The ogre was soon lulled to sleep by the sweet sound of the harp; and when he was snoring heavily, Jack crept out of the copper, and taking up the harp was about to make off with it. But the harp was a fairy harp, and it called out loudly: "Master, master, master;" and, although the ogre was snoring so noisily that it was like the sound of a hundred dragons roaring at once, yet to Jack's dismay and horror he heard the voice of his harp, and, starting to his feet with a bellow of anger, rushed after the daring thief.

Jack ran faster than he had ever run in his life before—still carrying the precious harp—while the ogre ran after him, shouting and roaring and making such a noise that it sounded like a thousand thunder storms all going at once. If he had not drunk so much wine for supper, the ogre must very soon have caught Jack; but as it was, the wine had got into his head, and so he could not run nearly so fast as usual, and Jack reached the beanstalk just in front of him.

After this, Jack quite gave up his lazy, idle ways, and he and his mother, with the magic hen and the wonderful harp, lived in happiness and prosperity the rest of their livesyy.