THE STORY OF CINDERELLA 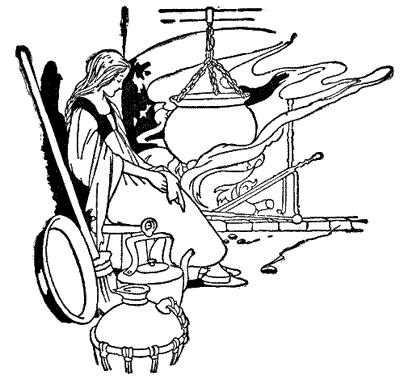 THERE was once a rich man, whose wife died, leaving him with one little girl. After some years, hoping to give his child a mother's love and care, he married again, this time a widow, with two grown-up daughters. But his second wife was haughty and proud, and her two daughters were even worse than their mother; and the poor little girl had a very unhappy time with her new relations. Her stepsisters were jealous of her, for she was very beautiful, and they themselves were plain and ugly. They did all they could to make her miserable; and, at length, through their wickedxx spite and envy, her life became a burden to her. The poor child was sent to livexx in the kitchen, where she had to do all the rough and dirty work; and because she was always dressed in rags, and sat beside the cinders in the grate, they called her Cinderella.

It happened that the King of the country had an only son. He was very anxious that the Prince should be married; so he gave a great ball, and invited all the grand ladies in the country to come to it. It was to be a very splendid affair, lasting for three nights, and people were very eager to be invited to it, for it was known that the Prince would choose his bride from among the ladies present.

Cinderella's sisters received invitations; and from the day they arrived they talked of nothing but of what they should wear, for each of them secretly hoped that she would be chosen as the Prince's bride.

When the great day came at last, they began to dress for the ball directly after breakfast.

Cinderella had to help them; and they kept her busy all day doing their hair, and running messages, and helping them to lace up their fine dresses.

When Cinderella saw their beautiful clothes she wished that she could go to the ball as well; but when she timidly asked if she might, they laughed in mocking scorn.

"You go to the ball!" they cried. "What would you do at the ball, with your rags and tatters and your dirty face? No, no, Cinderella, go back to your seat amongst the ashes—that is the place for a little kitchen girl like you!"

So the two sisters and their mother drove away in a carriage and pair to the King's palace, and Cinderella was left behind. She sat down on the hearth before the kitchen fire and began to cry softly to herself, because she felt so very lonely and miserable.

As she sat there in the dusk, with the firelight dancing over her, and her face buried in her hands, she heard a voice calling:

"Cinderella, Cinderella!" and with a start she looked up to see who it could be.

There on the hearth in front of her stood an old woman, leaning upon a stick. She was dressed in a long red cloak, and she wore high-heeled shoes and a tall black hat. 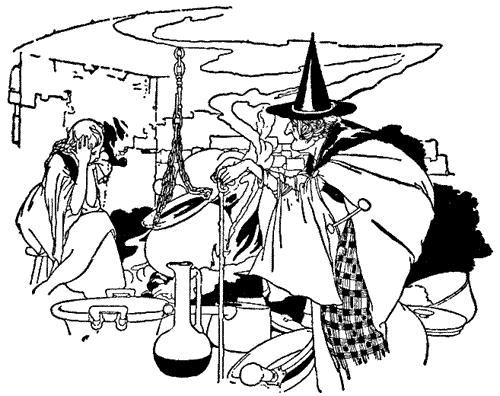 Where she had come from Cinderella could not imagine. She certainly had not come in through the door, nor yet through the window for both were shut.

Cinderella was so surprised to see her that she stopped crying, and stared at her in astonishment.

"What are you crying for?" asked the old woman.

"Because my mother and sisters have gone to the ball, and I am left here all alone," said Cinderella.

"Yes, but it is no good; I have nothing but rags to wear," sobbed poor Cinderella.

"Well, well, be a good child and don't cry any more," said the old woman, briskly. "I am your Fairy Godmother, and if you do what I tell you, perhaps you shall go after all. Run out into the garden and bring me in a pumpkin!"

Cinderella ran out into the garden and brought in the biggest pumpkin that she could find.

"Now go and fetch the mouse-trap out of the cellar," said her Godmother, and Cinderella hurried to get it. There were six mice in the trap, and the old woman harnessed them to the pumpkin, put a rat on the top to drive them, and two lizards behind, and then waved her wand over them. Immediately the pumpkin turned into a gorgeous coach, the mice into six beautiful horses, the rat into a stately coachman, and the lizards into tall footmen, with powdered hair and silk stockings. "There," said the old woman; "there's a carriage to take you to the ball." 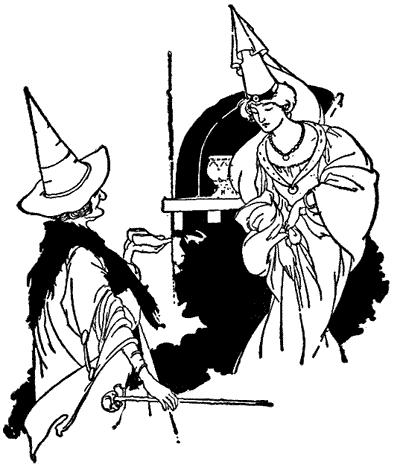 "Alas," said Cinderella, "how can I go to the ball? I have nothing to wear but this!" and she touched her ragged frock.

"Is that all?" said the Fairy Godmother. Once more she waved her wand, and Cinderella's rags turned into the most beautiful dress in the world, all shining with gold and silver threads and covered with costly gems. In her hair was a circlet of pearls, and her feet were shod with the prettiest and daintiest pair of glass slippers that ever were seen.

"Now," said the Fairy Godmother, "now you can go to the ball. But mind you come away before the clock strikes twelve, for should you linger beyond that hour, all your splendor will vanish, and your dress will turn into rags again."

Cinderella promised to obey her Godmother's instructions. Then she got into the beautiful coach. The footman shut the door, the coachman whipped up the horses, and away she went to the ball.

When she arrived there was a great stir in the Palace. So lovely a face and so costly and rich a dress had never before been seen, and everybody thought it must be some great Princess arrived from foreign lands. 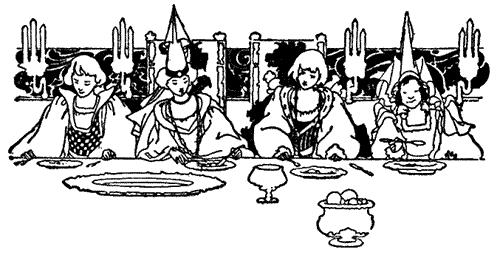 All the courtiers and other guests stood back to let her pass, and when the Prince caught sight of her he fell in love with her on the spot. He danced with her the whole of the evening, and people thought there was no doubt as to whom he would choose for his bride.

At a quarter to twelve, Cinderella, remembering her Godmother's instructions, said good-bye to the Prince and came away.

She arrived home just as the clock struck twelve. At once the coachman and footmen turned back into rats and mice, and the coach into a pumpkin; and when the sisters came home a little later, there was Cinderella, dressed in her old shabby frock, sitting in her usual place amongst the cinders.

The two ugly sisters were full of the strange Princess who had come to the ball. They talked about her all the next day, little dreaming that all the while the beautiful lady was their despised sister Cinderella.

In the evening after they had gone again to the ball, the Fairy Godmother made her appearance. Once more Cinderella drove to the Palace in her coach and six; this time arrayed in a still more gorgeous and beautiful dress; and once more the Prince danced with her all the evening. 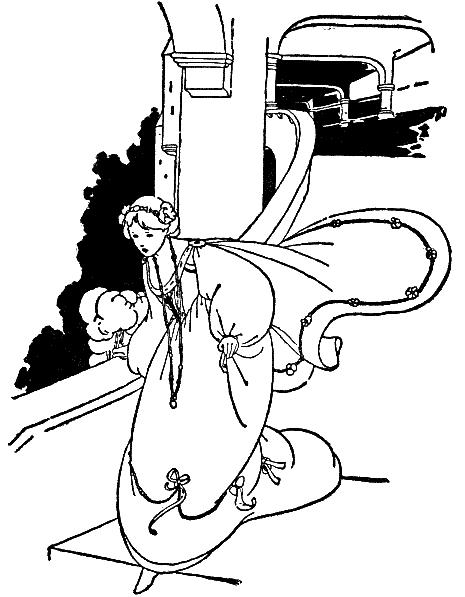 But when the third night came Cinderella was enjoying herself so much that she quite forgot what her Fairy Godmother had said, until suddenly she heard the clock begin to strike twelve. She remembered that as soon as it finished striking, all her fine clothes would turn to rags again; and, jumping up in alarm, she ran out of the room. The Prince ran after her, trying to overtake her; and Cinderella in her fright ran so fast that she left one of her little glass slippers on the floor behind her.

The Prince stopped to pick it up, and this gave Cinderella time to escape; but she was only just in time. Just as she was crossing the Palace yard, the clock finished striking, and immediately all her finery vanished; and there she was, dressed in her old ragged frock again.

When the Prince came out upon the Palace steps, he could see no sign of the lovely Princess. The guards at the gate told him that nobody at all had passed that way, except a little ragged kitchenmaid; and the Prince had to go back to the ball with only a little glass slipper to remind him of the beautiful lady with whom he was so desperately in love.

The next day the King sent out all his heralds and trumpeters with a Proclamation, saying that the Prince would marry the lady whose foot the slipper fitted. But though all the ladies in the land tried on the slipper it would fit none of them—their feet were all too big!

At last the heralds came to the housexx where Cinderella lived. The eldest stepsister tried the slipper on first, but it was quite impossible for her to get her foot into it, for her great toe was too big. Then her mother, who was watching eagerly, fetched a carving-knife.

"Be quick, cut the toe off," she said; "what does it matter if you are lame—if you are the Prince's bride you will always ride in a carriage!"

So the eldest sister cut off her big toe, but it was no useyy, the slipper would not fit, and at last she was obliged to hand it to her sister.

But the other sister had no better luck. She did, indeed, get her toes inside, but her foot was much too long, and her heel stuck out behind. The mother urged her to cut it off.

"What does it matter?" she said. "If you are the Prince's bride you will never need to walk any more."

But although she cut her heel off, the slipper was still too small; and at length she, too, had to give up the attempt to force her foot into it.

Then Cinderella came shyly out from behind the door where she had been standing out of sight, and asked if she might try on the slipper. Her stepmother and sisters were very angry, and were about to drive her away with blows, but the herald stopped them.

"The Prince wishes every woman in the land to try on this slipper," he said; and asking Cinderella to sit on a chair, he knelt down and tried the slipper on her foot.

And it fitted her exactly!

While everyone stood and stared in astonishment, Cinderella drew from her pocket the other slipper and put it on. No sooner had she done so than her ragged frock changed into the beautiful ball dress again, and she stood up before them all—the beautiful lady with whom the Prince had fallen in love at the ball.

The Prince was overjoyed to find her again; and they were married at once with much pomp amid great rejoicings.

As for the wickedxx sisters they were so jealous that they both turned green with envy. They grew uglier and uglier every day, until at last they grew so dreadfully ugly that nobody could bear to look at them any longer. But Cinderella became more and more beautiful, and lived happily with the Prince for ever afterwards.